“There is an integral scene with Nolan by himself in a record store that is bar none one of the best non-dialogue scenes in any indie or Hollywood movie in a long, long while.”
(Shannon Kelly, 1Kwave Review)

"As great as Nolan is in Worm, he’s at least twice as magnetic and captivating here when combining his original performance with the wrinkles and twists Powell’s script throws his way... a bloody and gory climax in which Nolan shows levels of acting talent not previously seen."
(James Lasome, Best Horror Movies)

"If I praised Nolan for his performance in Worm I was probably doing him a disservice as here in Familiar he takes it to another level. The man can convey so much purely from his facial expressions so that, once you add the dialogue, his performance becomes all that more terrifying. He really does deliver a true master class in horror."
(Jude Felton, The Lair of Filth)

"… could become a "Taxi Driver" for the modern era… with a superlative performance by Robert Nolan."
(Felix Vasquez Jr., Cinema-Crazed)

"… Robert Nolan is able to relay in actions and thoughts a believable structure of a tormented soul."
(Greg Roberts, Killer Reviews) 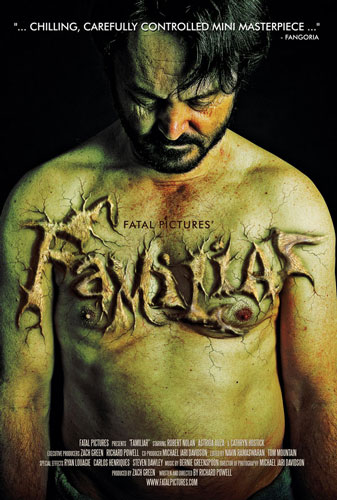